Memory is a funny thing – it’s not just a matter of recounting stories that have happened to us in the past. Memories are also very much about how we situate ourselves in the present. The stories we tell about ourselves and others now are a crucial aspect of the personality and identity we choose to present to the world. For this reason academic historians, as a rule, avoid using personal accounts from wartime servicemen written long after the event. They view them as too anecdotal to be useful and really more concerned with the present of the author rather than their past. In their eyes the value of a source often increases the closer it gets to being written at the time of the events being investigated. This is a shame because there is certainly some useful information in later personal accounts and it’s worth doing the work to find important stories. Perhaps it’s because there are so many contemporary sources available for the modern period – I don’t think Medievalists are so choosy!

Horace Q. Waggoner from Waggoner, Illinois (the town carries his family name) was an early replacement pilot to the 353rd. He flew his first operational mission as a member of the 352nd Fighter Squadron March 23, 1944 and went on to fly two tours of duty. He flew his last operational mission on April 19, 1945. After the war he stayed in the service and completed a further two tours of duty in Korea and also served in Vietnam. Retiring in 1974 he studied for his BA and MA degrees in History at Sangamon State University (now part of the University of Illinois) and was then employed in their oral history department. This was a happy occurrence for 353rd Fighter Group history because as part of his work there he recorded (and then arranged the transcription of) the 1983 Group Reunion. He also produced a taped interview and transcription of his own wartime experiences with the 352nd Fighter Squadron and was planning a full group history for which he had carried out extensive surveys and interviews of surviving members. Sadly, however, he died March 18, 1987 at the relatively young age of 62 leaving the project uncompleted. 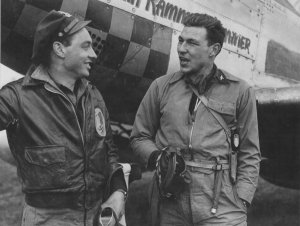 Capt. Horace Q. Waggoner with Lt. Arthur C. Cundy in front of Cundy’s “Alabama Rammer Jammer.” Cundy was lost heading out on a mission on March 11, 1945. 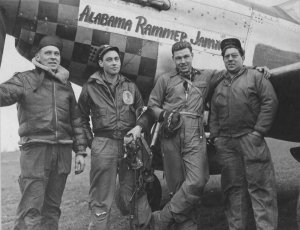 If ever there was a significant contribution to the history of the group – Wag’s oral histories have to be it. Both the 1983 Memoir and his own personal Memoir are available on the internet and I can heartily recommend you read them for a fascinating insight into Group history and the personal experiences of one of the key members of the 352nd Fighter Squadron. Pilots who make an appearance in the 1983 recording are: Roy Anderson, Charles Briggs, Gordon Burlingame, Bill Cabanne, Lloyd Hunt, Bill Jordan, Charles Kipfer, Michael Martorella, Doug Reinhardt, Bill Streit and Horace Waggoner. There are also a number of ground personnel: James Cope, Hiram Spicer, Charles Wurtzler (352nd), Charles Graham, Joe Canipelli, Roy Seignemartin (350th) and Harman Wheeler (351st). Oral history has come a long way since the pioneering days of individuals such as Horace Waggoner. Back then it was very much about “recovery” – recording stories from people whose voice would otherwise be lost to history. This is still a large part of what oral history is about, but historians are also increasingly interested in the process and production of identity that I mentioned at the start of this article.

You should, of course, read both transcripts with a critical eye. An example from the 1983 Memoir demonstrates the dangers of accepting the stories verbatim. On page 25 Bill Jordan, another two tour veteran of the 352nd, recounts an event of which he actually has no recollection. Doug Reinhardt has told Jordan that he remembers him returning to Raydon from a mission and shooting a .45 calibre pistol over the head of an errant armourer. Doc Cope is on hand to explain why Jordan might not remember – he suggests he’s blocking out difficult memories. Alternatively, Reinhardt might be remembering the incident incorrectly. To further complicate things, Sgt Donald W. Knowlton was Jordan’s armourer and not Hogan. All this goes to show that memory can be unreliable and it is now probably impossible to get to the truth of the incident. Despite this the transcripts can be read and enjoyed as a unique insight into Group and Squadron life and Wag can be applauded for his efforts to record history now nearly 30 years ago.

This article also raises the problem of identities for Waggoner’s aircraft. It is quite an involved case, but hopefully I can explain the progression clearly. Gordon Burlingame was the pilot assigned to SX-M (P-47D-15-RE a/c 42-75875). He named his aircraft “Stinky Poo” (there was definitely an original and “2nd” and maybe also a “3rd”) in sympathy for his wife back home who was dealing with their first baby. From his second aircraft onward he also had a “Davy Don” college mascot painted on the engine cowl. 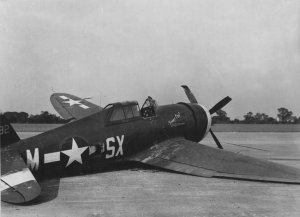 Burlingame completed his first tour on April 23, 1944 and returned to the United States on leave. Waggoner joined the Squadron in March and flew a variety of aircraft until SX-M (a/c 42-75875) became his regular aircraft from April 24 onward. He named the aircraft “Miss Illini” as an obvious play on words – it has also been suggested on the internet that this might be related to the University of Illinois sports team name, but I cannot verify this. Waggoner flew this aircraft until sometime

around mid June when he received a new Thunderbolt. The original SX-M was re-coded to SX-M and became the regular aircraft of Lt. Donald L. Barber who named it “Gloria Ann” (I can confirm a/c 42-75875 was SX-M because Lt William McGarry had a recorded accident in it on August 13, 1944).

Waggoner’s new P-47 was a D-25-RE (a/c 42-26661) that was coded SX-M and also named “Miss Illini.” There is a picture of the aircraft and name artwork on page 204 of Cross’s Jonah’s Feet Are Dry. This aircraft had a chequered career with the squadron. Waggoner finished his first tour at the end of July. SX-M then passed briefly to Lt. James M. Tuttle and I have some pictures of him with the aircraft and the interesting “Florida Schools Amatilla” artwork on the left hand side of the aircraft. I have no idea what this actually was, but it is likely that it was some kind of war bond sponsorship of the aircraft.

Tuttle was lost flying another aircraft (SX-J) when he flew through the bomb blast caused by a fellow pilot on August 12, 1944. He managed to successfully evade and you can read his evasion report HERE. So when Gordon Burlingame returned from leave and started flying operations again on August 28 Waggoner and Tuttle’s old SX-M D-25-RE became his aircraft. He quickly had the “Davy Don” that you can see on page 204 of Jonah’s Feet Are Dry painted on to make it his distinctive aircraft. The Group converted to Mustangs in October and SX-M was transferred out of the Group. It was lost March 14, 1945 to flak and its pilot Lt. William A. Cunningham became a POW. You can read more of 42-26661’s subsequent history with the 406th Fighter Group HERE. Burlingame’s new P-51D-10-NA (a/c 44-14620) was coded SX-M and named “Davy Don Chariot.”

If you have enjoyed the photos of SX-M throughout this post, take a second to note the “B Flight” team that kept Burlingame, Waggoner and Tuttle in the air throughout their tours. Surely the hard work of Crew Chief S/Sgt Otto J. Stopen, Assistant Crew Chief Charles B. Perkins and Armourer Sgt Joseph S. Mortorana also deserves recognition. They kept SX-M flying and thus played a vital role in ensuring the Squadron and Group could perform the missions they were assigned to carry out… 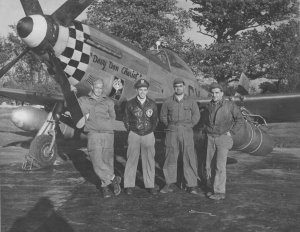 It occurred to me after posting that I was selling Stopen, Perkins and Mortorana short. They did, of course, continue to crew SX-M after Burlingame finished his second tour on December 11, 1944. Lt. John E. Davenport was assigned to the Squadron on October 28 and flew his first mission on November 6, 1944. After Burlingame finished, SX-M (a/c 44-14620) was assigned to Davenport who flew it operationally for the first time on December 18. He rechristened the aircraft “Lucky Leaky.” I don’t have any photos of SX-M in this guise, but do have a couple of photos of Davenport’s second aircraft P51C-5-NT (a/c 42-103363) named “Lucky Leaky II.”  That, I believe, completes the list of the pilots Stopen, Perkins and Mortorana crewed for. 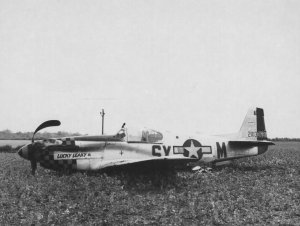 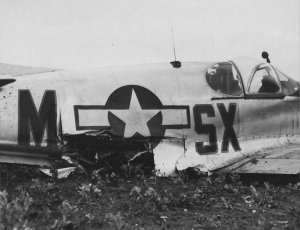 The other side of the very broken “Lucky Leaky.”

The 353rd have another connection with the 406th Fighter Group (the recipients of Waggoner’s/Tuttle’s and Burlingame’s SX-M D-25). Seventeen pilots from the 513th Fighter Squadron were stationed at Raydon from September 18 to 23, 1944 to assist in the supression of flak sites during the ill-fated Operation Market Garden. 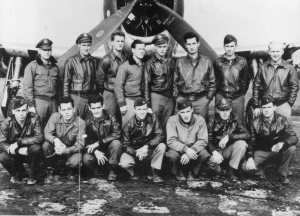